You are here: Home > Our collections > Military

Wexford town and county have a long history of courageous patriotism, from the Cromwellian siege of Wexford in 1649 to the military strategy of the Wexford United Irishmen in 1798, to the Young Ireland rebellion of 1848, the 1916 Easter Rising and through to the Irish War of Independence and Civil War periods. The county archive is home to a number of military collections.

The 1798 period in Co. Wexford’s history is well documented in extant records including original documents, publications, artefacts (incl. regimental badges and buttons, cavalry pins, infantry brooches, cavalry drinking cup) and a small number of paintings. The more noteworthy of these archives are on public display in the National 1798 Rebellion Centre, Enniscorthy.

Our 1916 collection documents Co. Wexford’s involvement, and in particular Enniscorthy’s prominent role, in the lead up to and the aftermath of the 1916 Easter Rising. Records include original and copy documents, photographs, correspondence to and from imprisoned Volunteers, military artefacts, weaponry and a range of republican prison craftwork. Many items from the collection are on public display in Enniscorthy Castle in a permanent exhibition dedicated to 1916. Some of our military archive holdings include:

James Fitzhenry, born at Fair Gate, New Ross on 14 January 1887, served as a gunner (No. 13140) in the Royal Field Artillery. This collection contains personal correspondence between James and his sister Bridgie and includes the three commemorative medals issued to personnel of the British and Empire Forces who took part in World War 1. Gunner Fitzhenry was killed in action in France on 5 April 1917. 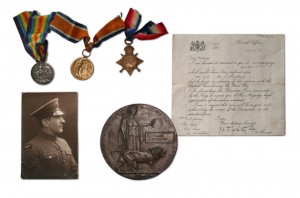 Edward Roe, born at Begerin Loftus, New Ross on 22 August 1901, joined the Cushinstown Company of the South Wexford Brigade of the IRA at the age of 16, and was one of those selected to escort De Valera at the 1918 Waterford by-election. He was active in the IRA during the War of Independence and during the Civil War, was arrested by Free State troops and imprisoned in Kilkenny Jail. By the end of the hostilities, he was Captain of the Cushinstown Company of the IRA and Quartermaster with the South Wexford Brigade. During President John F. Kennedy’s visit to New Ross in 1963, Edward represented his former comrades on the reception platform.
He worked as a rate collector and later as an overseer with Wexford County Council and died on 28 November 1969.