You are here: Home > Our collections > Digital > Valentine Gill map of Co. Wexford, 1811

Entitled ‘A new map of the county of Wexford from actual survey by Valentine Gill’, it was published by Gill, a surveyor of lands from Enniscorthy, Co. Wexford, in August 1811 and concentrated primarily on showing the location of people connected with the 1798 rebellion.  A list of subscribers to the map was published in the Wexford Herald of 7 September 1807.  The coat of arms for each subscriber was to be engraved on their copy of the map, the subscription per copy being £2. 5s. 6d.

This particular copy of the map was ordered for George Ogle of Bellevue, a Member of Parliament for Co. Wexford from 1768-1796 and one of the leaders of the yeomanry in Wexford prior to the 1798 rebellion.  The inscription on the bottom right-hand corner reads as follows:

For the Right Honorable George Ogle

Is most humbly and respectfully Dedicated

By his obedient servant

Gill published another edition of this map in 1816, a copy of which is available in the National Library of Ireland www.nli.ie

The map below, which originally hung in the former Wexford County Museum in Enniscorthy Castle, had suffered extensive paper tears and adhesive damage.  It was repaired by a professional paper conservator in July 2014 thanks to financial assistance from the Heritage Council and subsequently photographed by Donald McDonald.  Dominic Berridge has kindly provided a transcription of the townlands and associated names which will be made available shortly. 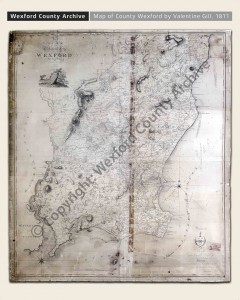