You are here: Home > Our collections > Local Government

Grand Juries represent one of the earliest forms of local government – initially charged with the administration of justice, these 23-member juries were mainly composed of prominent local landowners who were appointed by the sheriff. They met twice yearly at the spring and summer assizes for the purpose of passing presentments. Presentments invariably comprised proposals for work such as the construction of a bridge or road repair. Their functions gradually expanded to the provision of roads, bridges and public buildings in addition to the maintenance and administration of local institutions such as court houses, dispensaries, fever hospitals, county infirmaries and county gaols.

The main extant record series for Co. Wexford Grand Jury represents volumes of presentments – these comprise printed lists of approved new works and renewals of contracts but also include such information as salaries, rents of petty and road session houses and reports on industrial schools. 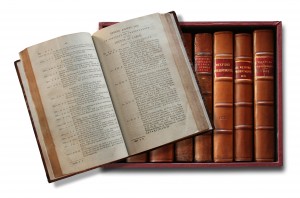 In response to the spiralling problems of poverty and rapid growth of population in Ireland by the early 19th century, the Poor Law (Ireland) Act ‘for the more effectual Relief of the Destitute Poor in Ireland’ was introduced in July 1838. Under the Act, Ireland was divided into a number of poor law unions.  Each union was managed by a Board of Guardians (two-thirds of whom were elected and one-third ex-officio members). The Act stipulated that a workhouse was to be built in each union for the single purpose of relieving the poor and destitute – this was known as indoor relief. The Act provided for a central authority, the Poor Law Commission (Local Government Board from 1872) to oversee and direct each Board of Guardians. The money to construct and maintain the workhouses was obtained from the poor rate, a tax introduced in 1838 and levied in equal parts on both the owners and occupiers of holdings.

Initially concerned with the administration of poor relief, as time progressed, the Guardians took on more varied responsibilities including the boarding-out of children, outdoor relief, dispensers of public health and providers of houses for labourers under the Labourers Acts, 1883.  The Medical Charities Act, 1851 brought dispensaries under the control of the poor law system for the first time, with each union having a salaried medical officer.  The Boards of Guardians also became the rural sanitary authorities under the Public Health (Ireland) Act, 1878.

There were four unions in Co. Wexford with workhouses in Wexford, Enniscorthy, New Ross and Gorey.  The poor law system was very bureaucratic in nature and generated an extensive amount of records. Invariably for the four unions in Co. Wexford, the main surviving records are minute books which document the weekly administration of the workhouse, school and infirmary/fever hospital.  The minutes also document the collection of the poor rate (and arrears accruing) in each electoral division, the food and beverage provisions requisitioned each week, brief reports from the workhouse master and from the Visiting Committee, in addition to details of correspondence to and from each of the four Boards of Guardians and the Poor Law Commission.  Extant records for Gorey workhouse include an interesting collection of bonds and contracts from the 1850s which are invaluable for family history research in the absence of other records for the period.

In an effort to better enhance remote access to these indispensable family and social history source materials, the minute books for Wexford and Enniscorthy unions have been digitised and are now available online.  Please note that due to the size of many of the volumes, they have been split into sections to allow for speedier access when opening them.

Records for Wexford union workhouse include:

Records for Enniscorthy union workhouse include:

Records for Gorey union workhouse include:

Under the Local Government Act (Ireland) Act, 1898, rural district councils were established. These bodies took over the responsibilities for housing and rural sanitary functions from the boards of guardians and took over the roads and public works functions from the grand juries. One of their main areas of responsibility was the provision of housing, including the acquisition of land for agricultural labourers’ dwellings. They were abolished under the Local Government Act, 1925 and their functions transferred to the county council and the board of health.
The main record series in this collection comprise minute books, labourers’ cottage rentals and ledgers.

County Wexford Board of Health and Public Assistance

Under the Local Government Act, 1925 rural district councils were abolished and their housing and sanitary responsibilities transferred to the county councils who discharged these functions through the county boards of health.

The Act also allowed for the appointment of medical officers of health to supervise public health functions. The responsibilities of the boards of health were varied ranging from housing, water and sewerage functions to the supervision of homes, hospitals and dispensaries. They were also charged with the administration of home assistance, infectious diseases and the school medical service.
Most of the boards were abolished under the County Management Act, 1940 and their functions subsequently discharged by the county councils through their health and public assistance section up until the establishment of the health boards under the Health Act, 1970.

The main record series for Co. Wexford Board of Health and Public Assistance is the minute books. They represent an invaluable primary source for the development of the public welfare system in the early 20th century. Issues discussed through the minutes include sanitation matters, housing repairs, sourcing of dispensary residences, control of infectious diseases, reports from the agriculturalist and veterinary inspector and financial administration of the system. As there are many references throughout the minutes to home assistance which detail the social, personal and financial circumstances of families and individuals, these records are subject to restricted access.

Wexford County Council was established under the Local Government (Ireland) Act, 1898 – many of its functions including the provision of housing, roads, bridges, water supply and sanitary services were inherited from its forerunners, the grand jury and the boards of guardians. The first meeting of the Council was held on 22 April 1899. The archives of Wexford County Council include:

The forerunner of the present Wexford Borough Council (2001) was Wexford Corporation which had its origins back in the 12th century. The first charter for Wexford dates to 1317 and was granted by the Aymer de Valence (a transcript of this charter is retained in the archives). The only extant charter for Wexford town is the Victoria charter of 1846. The Corporation archives include: